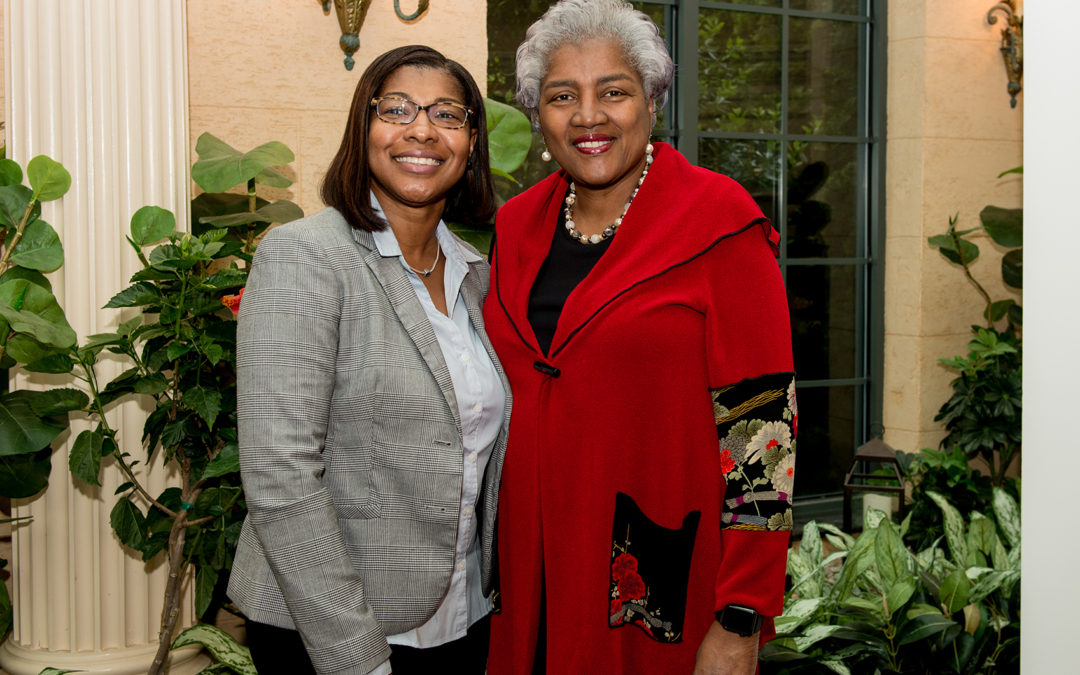 Veteran political strategist Donna Brazile is the former Chair of the Democratic National Committee (DNC) and the author of the New York Times bestseller Hacks: The Inside Story of the Break-Ins and Breakdowns That Put Donald Trump in the White House. She is also the author of the 2004 best-selling memoir Cooking with Grease: Stirring the Pots in American Politics. She is a co-author of the forthcoming book entitled For Colored Girls Who Have Considered Politics.

Ms. Brazile has devoted her life to working for progressive change, responsible governance, and the advancement of all people in a society that is fair and equitable. Brazile first got involved in politics at the age of nine when she worked to elect a City Council candidate who had promised to build a playground in her neighborhood; the candidate won, the playground was built, and a lifelong passion for political progress was ignited. Brazile has worked on every major presidential campaign since 1976 and in 2000 Ms. Brazile became the first African American woman to serve as the manager of a major party presidential campaign, running the campaign of former Vice President Al Gore.

Ms. Brazile loves working with young people, encouraging them to vote, to run for office, and to work within the system to strengthen it. She has lectured at over 200 colleges and universities across the country. In 2013, Ms. Brazile was appointed by President Obama to serve on the J. William Fulbright Foreign Scholarship Board. She is also the proud recipient of more than ten honorary doctorate degrees from major colleges and universities, including her alma mater Louisiana State University. In October 2017, Ms. Brazile was the recipient of the W.E.B Du Bois Medal, Harvard’s highest honor in African American studies.

Ms. Brazile has worked passionately on behalf of her beloved hometown of New Orleans. In the aftermath of the two catastrophic hurricanes that devastated the Gulf region, Ms. Brazile was appointed by former Governor Kathleen Blanco to serve on the Louisiana Recovery Board to work for the rebuilding of the state and to advocate for the Gulf recovery on the national stage. Ms. Brazile was also appointed by New Orleans Mayor Mitch Landrieu to serve on the Tricentennial Commission.

Ms. Brazile was formerly a contributor to ABC News and CNN. Ms. Brazile was the recipient of a Daytime Emmy Award for Outstanding Daytime Program, Good Morning America (2016-2017) in connection with her work with ABC. She has also been a syndicated newspaper columnist for Universal U’Click and a prolific writer with articles appearing in nearly every major newspaper in the nation. She moonlights as an actress and is especially honored to have made three cameo appearances on CBS’s The Good Wife, and two cameo appearances on Netflix’s series House of Cards. She most recently appeared on BET’s Being Mary Jane. Ask her and she’ll tell you that acting, after all, is the key to success in politics.

Nearly 100 years after gaining the right to vote, women are still grossly underrepresented in politics in the United States. Despite studies that show a majority of American Constituents are willing to vote for a female candidate, women still only make up 19 percent of all members of Congress, less than 25 percent of our state legislators, and 12 percent of our nation’s governors. So, what continues to hold women back? Some studies suggest that years of institutionalized discrimination and systemic sexism has left a lasting impression, shaped social norms and created a political structure that is simply not made available to women.

It is necessary to have more women at the table if we plan to solve the challenges we face as a nation. We need more women getting elected, more women leading, more women organizing, more women lobbying for change, and more men willing to stand up for the values that create a safe environment for women in politics. There are many opportunities this year for those looking to enact positive change. Getting more women on the ballot is just the beginning.